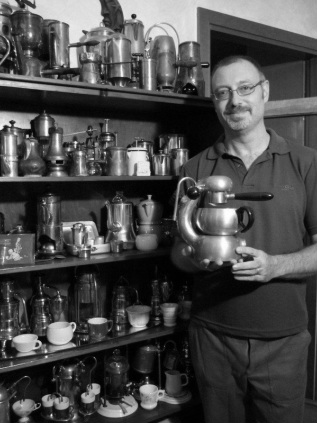 Born in Trieste in 1969, Lucio Del Piccolo is a leading Italian collector of domestic coffee makers. His extensive research and writing are reference points for coffee geeks and enthusiasts worldwide. He is also a devotee and educator about the world of coffee, from its origins, to its roasting methods cupping.

After a short period of accumulating, he became passionate about the history of these everyday objects, their inventors and manufacturers, technological innovations, patents and restoration.

In 2008 he started a blog on the subject; in the subsequent five years he has written more than 650 articles and surpassed 260,000 visitors (press here for the link).

His extensive research has uncovered nearly 1500 patents on coffee machines and 3000 images.

In 2009 Lucio began a collaboration with Mauro Carli and Enrico Maltoni for drafting a revolutionary book that covers the known universe of coffee makers. With more than 700 pages and 2700 photos it documents the machines of major collectors worldwide (press here for the link).

In October 2009 he was interviewed by the German monthly magazine Crema and his photo appeared on the cover of its November issue (press here for the link). In 2011 he was featured in a national Italian broadcast, and in the same year hosted his first solo exhibition at Trieste Antiqua.

In 2012 he organized an exhibition and demonstrations with the painter Franco Castelli, and participated in the Fair Triestespresso hosted by Elektra srl.
Also in 2012 he took part in a documentary dedicated to the coffee in northeastern Italy, which will be broadcast in 2013 by Al Jazeera.

In March of 2013 he presented part of his collection at the launch of the Nespresso capsule dedicated to his hometown of Trieste.

Lucio Del Piccolo’s collection of coffee makers consists of more than 400 objects from all over the world.