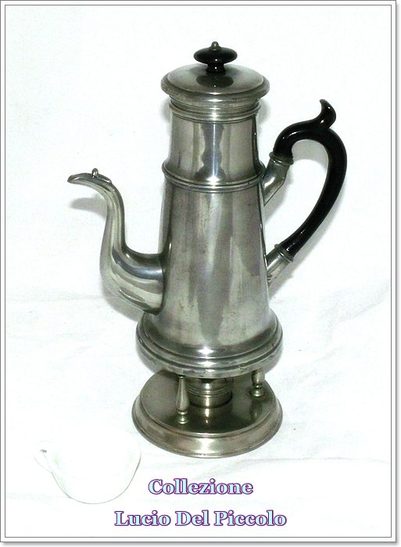 At the end of the 18th century and subsequent early decades a new method was discovered: known as "percolation" or " filter" it consists in passing boiling water through the ground coffee and then through a metal perforated filter, or through a muslin cotton bag (these coffee makers were commonly called "Biggin").
Further improvements came in 1806 (monsieurs Hadrot patent)with the invention of the diffuser disk that allowed the descent "rain" of water over the ground thus ensuring uniformity in the extraction.
This method further changed in Germany in the early '900 through the use of paper filters.
Currently percolation is one of the most popular methods in the world.

Coffee drip percolator made of “white metal” ( an alloy of tin, lead and copper) produced by Vickers in Sheffield between 1836 and 1840. The burner stand was used to keep the drink hot.

Continue percolation system
back
Powered by